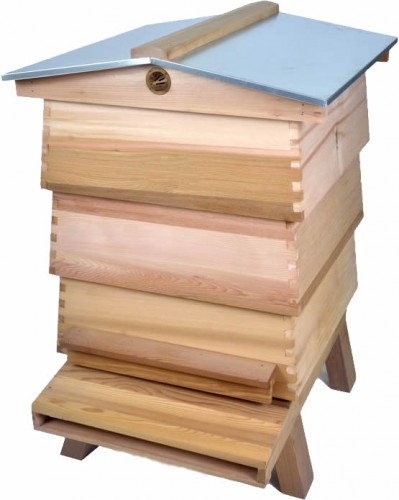 Written by on October 1, 2014. Posted in Articles, BeeCraft

When a colony of honeybees is making preparations to swarm they start to send out scout bees to find a suitable new home. To start with, several different possibilities will be under consideration. This process starts before the swarm leaves the hive and continues while the swarm is hanging as a cluster close to the home hive. Once a consensus is reached as to the most suitable site, and this may take a few days, the swarm takes to the air and flies to the cavity that will become the new home of the swarm. Experimenters have investigated what constitutes the most suitable cavity. The cavity should be weatherproof, have a volume between 30 and 40 litres, have a small entrance about 10 sq cm in area, have an entrance facing south and the entrance should be near the bottom of the cavity. It is not a coincidence that a brood box and crown board on a hive floor can be ideal, except that the entrance should be small. Situation is very important. By preference the bait hive should be 3m or more above ground level, so that being placed on a flat roof can be ideal. Swarms will not readily go to bait hives within the apiary from which they emerged. Their instinct is to remove themselves several hundred metres (500m on average) from their home apiary. That does not mean that you will not catch a swarm in a bait hive in an apiary – it’s just that it is not likely to be your own. The ideal cavity is further enhanced if it contains wax comb. Foundation is OK but used comb is better. Swarm lure creams may further increase the chances of catching a swarm. By having a brood box full of frames and comb this will make it so much easier to manage a swarm if one is caught.