Written by .Peter .Bee on October 1, 2014. Posted in BeeCraft, General, The Bees 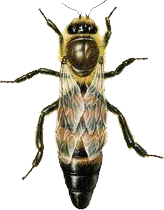 The Queen Bee is the most important Bee in the colony. She has a larger body which allows her to lay over 2,000 eggs a day. Her main job is to lay the eggs from which all the other Bees of the hive develop.

The Queen is different from the workers. She never collects food and depends on the workers to feed & groom her.

In each Bee colony or hive there is one Queen Bee – the Queen Bee is the mother of the colony. She lays all of the eggs which develop into worker Bees and drones or new Queens. There are two types of female in a Bee colony – the worker Bees and the Queen Bee. Both types start out as fertilized eggs – the difference in their diet and the cell that the egg is laid in are the factors that determine whether they will emerge as a Queen or a worker. In ordinary circumstances the Quuen Bee is the only reproductive female in the colony.

As she moves around the frame the worker Bees will turn towards her – this is called a retinue. The retinue is ever changing – the workers in the retinue will groom and feed the Queen. When grooming the Queen the workers will obtains substances from her called pheromones and these substances control some of the behaviour in the colony.

The egg laying cycle starts in early spring time. At the height of summer the Queen will be laying anywhere between 1,500 to 3000 eggs per day. Once the egg is laid it will then be the job of the worker Bees to rear it

She is the other Female , but the smallest bee in the colony – only about half the size of the drone or the Queen.

The honey Bee egg will hatch in about three days and emerge as a small white larva. At this stage one of the worker Bees who is acting as a nurse will fill the cell in which the larva is resting with a substance called Bee milk. On the eighth day the cell will be capped with wax. The worker Bee will emerge from her cell 21 days later. She is then ready to her duties in the hive. In the summer time a worker Bee will live for just over a month – about 36 days. During the winter she will live for about 6 months.

There are various roles within the colony that the worker Bee will perform – usually they will all progress from one role to the next but are able to perform any job at any time. The roles include nursing & cleaning, as mentioned earlier, also wax production, honey processing and guard duties. These roles are all ‘in-door’ duties and after about 20 days she will become a forager.

When the worker Bee is in this stage of her life her role is to find and collect pollen, nectar, water and propolis. These substances are required by the hive to live. The pollen is used by the Bees as a source of protein and vitamins. It is collected from flowers and carried back to the hive on the Bees hind legs. Nectar is stored in the honey comb, transported back to the hive is a specially designed honey stomach. Nectar, gathered from flowers is primarily sugar and water. Polpolis is a sticky substance gathered from plant buds, again carried to the hive on the Bees legs and is used for maintaining the hive.

A small number of the foragers will become what are known as scouts. The scouts explore the area around the hive for the best flowers from which to gather nectar. When they find a particular flower with a high sugar content they will return to the hive and ‘dance’ for the other Bees. The dance is a way of communicating to the other Bees the best forage available and the direction to go in order to find it.

A worker Bee has a life span of about 36 days. When a colony is at full strength in the peak summer months there may be as many as 50 – 60 thousand adult Bees and approaching 40 thousand Bees developing in the brood frames.

A Worker bee is any female eusocial bee that lacks the full reproductive capacity of the colony’s queen bee; under most circumstances, this is correlated to an increase in certain non-reproductive activities relative to a queen, as well. Worker bees occur in many bee species other than honey bees, but this is by far the most familiar colloquial use of the term.

Honey bee workers keep the hive temperature uniform in the critical brood area (where new bees are raised). Workers gather pollen into the pollen baskets on their back legs, to carry back to the hive where it is used as food for the developing brood. Pollen carried on their bodies may be carried to another flower where a small portion can rub off onto the pistil, resulting in cross pollination. Almost all of civilization’s food supply (maize is a noteworthy exception) depends greatly on crop pollination by honey bees, whether directly eaten or used as forage crops for animals that produce milk and meat. Nectar is sucked up through the proboscis, mixed with enzymes in the stomach, and carried back to the hive, where it is stored in wax cells and evaporated into honey.

Workers must maintain the hive’s brood chamber at 34.4 degrees C to incubate the eggs. If it is too hot, they collect water and deposit it around the hive, then fan air through with their wings causing cooling by evaporation. If it is too cold, they cluster together to generate body heat. The life of all honey bees starts as an egg, which is laid by the queen in the bottom of a wax cell in the brood area of a hive. A worker egg hatches after three days into a larva. Nurse bees feed it royal jelly at first, then pollen and honey for six days. It then becomes an inactive pupa. Honeycombs have hexagonal cells on both sides of a vertical central wall. As shown in the photo, these cells are inclined upward, primarily to retain liquid nectar and honey. During its 14 days as a pupa, sealed in a capped cell, it grows into a worker (female) bee, emerging on the 20th day. In most species of honey bees, workers do everything but lay eggs and mate, though Cape honey bee workers can lay eggs. They build the comb from wax extruded from glands under their abdomen. They clean, defend, and repair the hive. They feed the larva, the queen, and the drones. They gather nectar, pollen, water, and propolis. They ventilate, cool and heat the hive.

When a colony absconds (all bees leave the colony) or divides and so creates a swarm and then establishes a new colony, the bees must regress in their behavior in order to establish the first generation in the new home. The most urgent task will be the creation of new beeswax for comb. Beekeepers take advantage of this by introducing swarms into new or existing colonies where they will draw comb. Comb is much more difficult to come by than honey and requires about six times the energy to create. A newly hived swarm on bar bars (top bar hive) or empty foundation (Langstroth box hive) will often be fed sugar water, which they can then rapidly consume to create wax for new comb (Mature hives cannot be so fed as they will store it in place of nectar, although a wintering hive may have to be fed if insufficient honey was left by the beekeeper.) 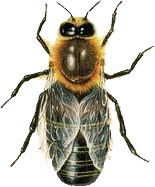 The Male Bees are called drones, they are found in much smaller numbers than the worker Bees. The drones develop from an unfertilised egg and are layed in a drone cell. The drones are bigger than the worker Bees and can be spotted by several distinguishing features – including the size and shape of their eyes and the size of their wings. The drone has the shortest life span, on average living for just 22 days after emerging from his cell.
The only know role of the drone is to mate with the Queen.

The drones will gather outside the hive in a flying cluster, they are attracted by the pheromones that the Queen produces when she emerges from the hive on a mating flight. The act of mating with the Queen is fatal for the drone – as his genitalia becomes detached from his body during mating.

At the end of the summer the worker Bees will evict any drones who remain in the colony.

The drone bee. How do I best explain the brief life of the honey bee male?

I suppose it depends on your perspective on life. On the one hand, they:

On the other hand…..

Well, you may say:

“it serves them right”.

Or you may say:

“Well, if my life was short like that, I’d want to enjoy it while I could!”.

On the other hand…….

what about this for a description of the life of a drone bee:

Drones have short lives, but they are there when the colony needs them, to make the ultimate, heroic sacrifice of mating (then promptly dying), all in order to ensure the continuity of the whole colony.

OR, you could simply say:  it’s just nature – which of course, is what it is – it’s the natural way of things for honey bees.

Okay, enough flippancy. Let’s get on with the real information!

Drones are larger than workers, but smaller than queen honey bees. Their eyes are relatively large, and they develop from unfertilized eggs. (The process of fertilization being controlled by the queen honey bee).

Interestingly, the drone has no father, but he does have a grandfather!

Being from an unfertilised egg, he has only half the chromosomes of a worker bee, however, the queen came from a fertilized egg.

This scenario is referred to by biologists as ‘parthenogenesis’.

Each colony will produce several hundred drones. Their main contribution to the colony is the act of mating. Mating tactics of drone bees reminds me of blokes congregating at a club, waiting for the women to arrive! In a similar fashion, drones congregate around ‘hot spots’ waiting for the appearance of new queens.

During the course of around 3 nuptial flights the queen honey bee may mate with around 20 drones. Obviously some of the drones will be disappointed then!

As explained before, the drone will die upon mating. This happens because the drone’s reproductive organs are torn away from its body, whilst the queen flies off, with the drones genitalia attached to her.

Drones may live for just a few short weeks, but if they are lucky, they may live up to 4 months. They are thrown out of their colonies by the end of summer, but in any case, by the end of autumn, there will be few or no drone bees around.

Unlike queens and workers, the drone cannot sting. And although the do not forage for food, it is believed by some that they may help to incubate the brood.

In ensuring future generations of honey bees, it sounds like they do a great deal for the colony in a very short space of time!